Gin was my first love. As a young student testing the grown up waters of alcohol, first I was introduced to the various forms of cheap beer and ales. I still think they taste liquidized nickel. Then there were the the whisky cokes and the orange vodkas but I could not stand the smokiness of the former, or the harshness of the latter. Afterwards I arrived at the gin and tonic. The initial appeal was the wedge of lime I got to suck on after consumption. I also simply preferred it to beer, which tasted like gutter water with fizz, and to the other mixed drinks that were cloying sweet. So I started saying that I liked gin. 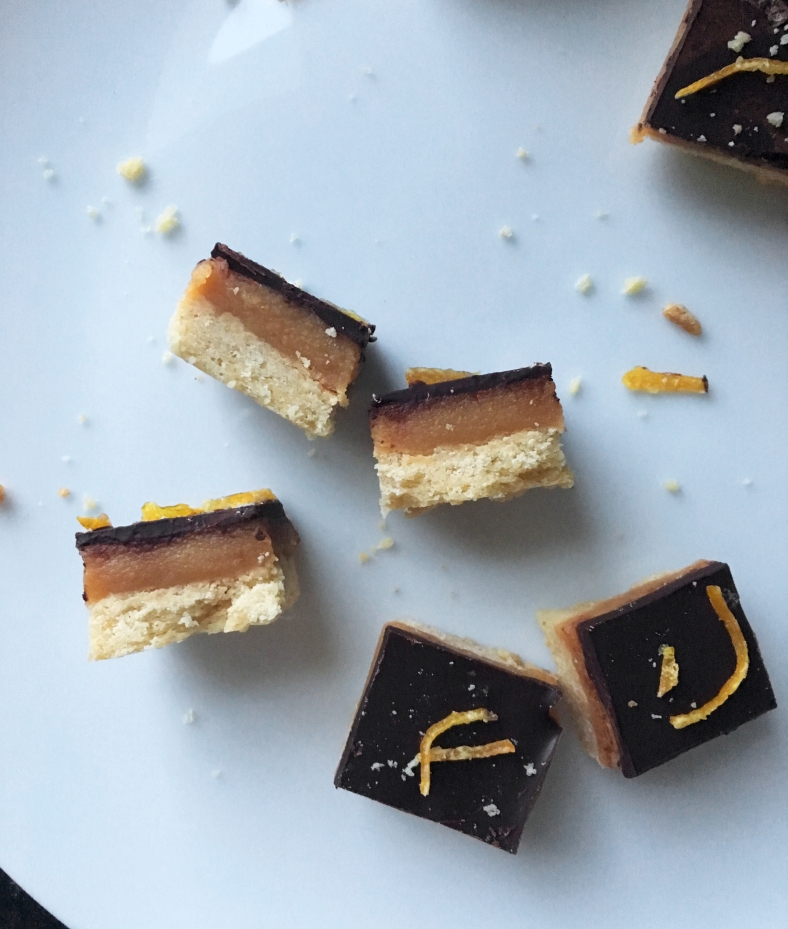 Then, with the British craft gin boom, I got to try the more sophisticated stuff, and those are real nice. The medley of herbs and spices, from the classic juniper to more exotic lemongrass and pine.

Brockmans is pleasantly fruity, with heavy berry notes. They recommend serving the drink with a slice of grapefruit and some blueberries, so I’ve incorporated former into the recipe of my millionaire’s shortbread.  The grapefruit comes in the form of zest in the shortbread, and candied pieces on top of the bitter dark chocolate. And the caramel is where I’ve stirred in a generous amount of Brockmans (mmm). 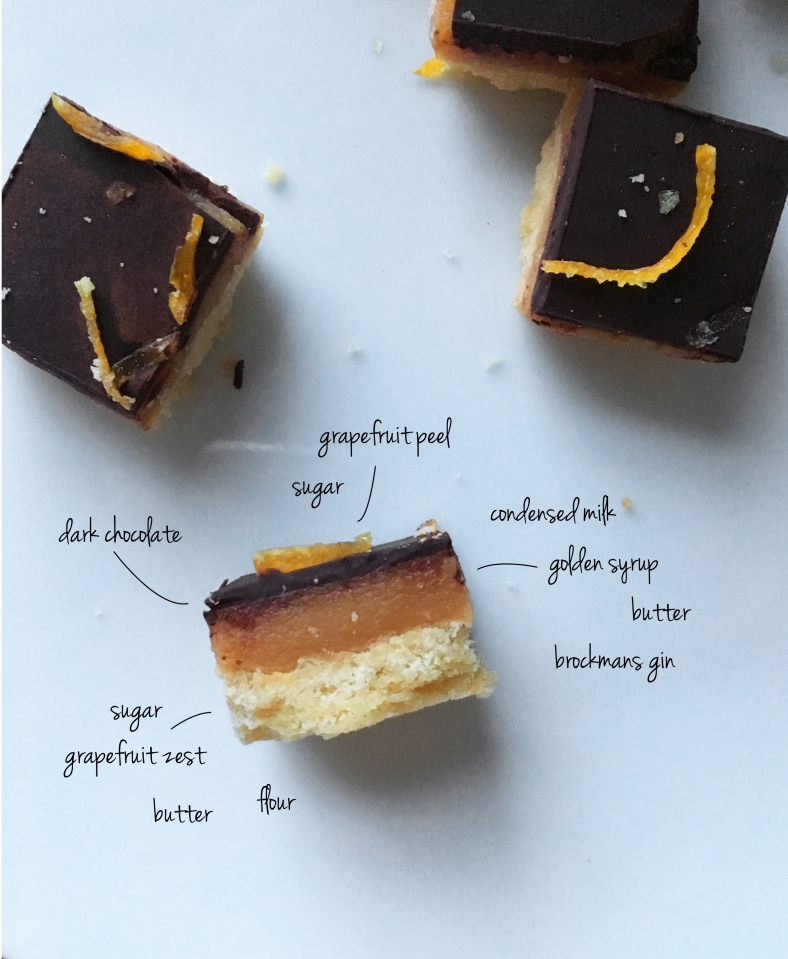 A good millionaire’s shortbread is luxurious, decadent and a pure delight, but a good one is hard to find. Firstly, it’s a rich mouthful and thus it should remain bite-sized, not like your mother’s brownie. The caramel is often too hard and chewy and unpleasantly sticks to your teeth. The shortbread is often dry and disappointing. Altogether the usual commercial shortbread just a cloying, unpalatable mouthful.

So let me guide you through a good millionaire’s shortbread. You want the shortbread crunchy, and importantly buttery, but not too much so because it’s topped with caramel and chocolate. The grapefruit in this recipe cuts through the richness of the whole dessert. The caramel must be soft, almost melting but still holds to keep its shape. I’ve stirred in the alcohol at the end to keep the kick, which comes through just at the final moments. The dark chocolate on top should be just dark chocolate, something that snaps, you don’t want a ganache made of dark chocolate and cream because then it’s just all too soft. You also want it bitter, not creamy which would add more richness to this dessert. Again, topped with some candied grapefruit peel to just lift the whole thing up a bit, add a bitter zing. 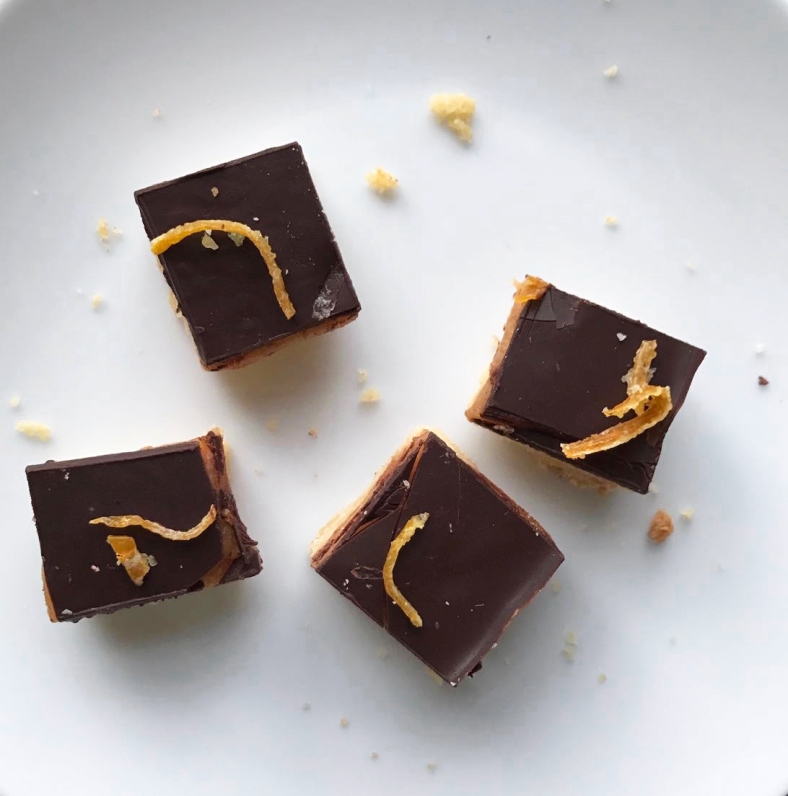 In a large bowl mix together the flour, sugar and zest. Rub in the butter until the mixture resembles ground almonds.  Press into the tin – as evenly as possible.  Prick wit a fork and bake for about 35 minutes or until golden.  Leave to cool completely.

Caramel
Melt the butter over low heat in a heavy-based pan and then stir in the golden syrup and condensed milk.  Turn the heat up slightly and bring it to a simmer.  Stir continuously for about 10 minutes, keeping the simmering, until it turns slightly brown and it comes away from the pan slightly.  Remove from heat and stir in the gin. Leave to cool slightly, just a few minutes.

Pour over this evenly over the cooled shortbread.  Leave to set — about 30 minutes.

Zest
Peel the grapefruit, and remove the white pith of the peel. Thinly slice the zest. Bring a small pot of water to the boil and and add the zest. Simmer for three minutes, drain and repeat once more.

Bring 1/2 cup of sugar and 1/2 cup of water to the boil. When the sugar has completely dissolved, add the zest and turn down the heat. Simmer for 10 minutes then remove with a slotted spoon and leave to dry on baking paper.

Topping
Break the chocolate into pieces and melt the chocolate over a double boiler.  Pour over the caramel and tilt the tin so that it spreads evenly.  Leave to set, and top with candied grapefruit just when the chocolate is almost set (so the grapefruit still sticks but doesn’t sink). Once completely set, lift the whole thing out of the tin using the paper and cut into little bite-size squares. 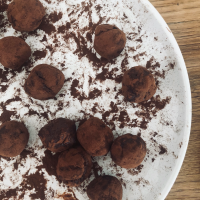 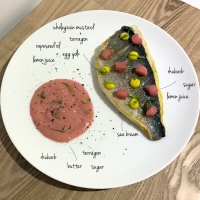 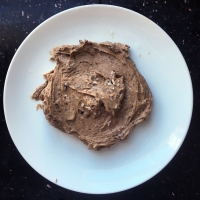